skip to main | skip to sidebar

Thanks to the good efforts of my webmaster Cam McGuinness, I have incorporated this blog into my own website. So you get to see all my pretty pictures as well as read what I've been up to or what's been happening in my world.

The current entry talks about Richard Millard, the most highly regarded glass painter in the USA, who died peacefully Feb 27th this year. He spent his youth in Australia and came back only last year to teach a workshop for Geoffrey Wallace studios in Melbourne. 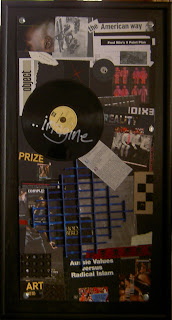 What I do want to tell you about is the new exhibition at ATVP Gallery in King St Newtown called Sign of the Times. It's their anniversary show and I finished off a new collage work, More Than Simply Black and White especially for the exhibition. Hope you get to see it.
Posted by Jeffrey Hamilton at 9:18 PM No comments:

And So Ends Another Sydney Mardi Gras

I spent my 2011 season volunteering for the Gay and Lesbian Rights Lobby as a way of being involved in the grass roots of the Mardi Gras festival. That included selling hearts at Fair Day in the hot sun and manning coat checks at both Toybox and Harbour Party. Mrs Macquarie's Chair is a gorgeous location to host a dance party; it was the first time I have attended and I really understood why it is such a popular party. Rather than post imjages here ( andsince I don't have a decent camera at present) you can get all the photos you want at SX News and the Sydney Star Observer

The big finale for the Mardi Gras festival was the last ever Toybox party at Luna Park. What a party it was! Great music, both upstairs and down, fantastic light show and a really happy crowd. The final show, with a diva suspended above the cowd belting out "Reach for the Stars" has to have been the very best event in the dance party genre that I have witnessed.

As well as the parties there was a veritable visual arts feast this year.... Although most of my time and energy has been invested in the Samoan Congregational Church commission (see previous blogs), I did get to enjoy some of the shows. Iain Dawson Gallery in Paddington hosted Hot in the City and although I just missed the actual exhibition, there were several large canvases of Alun Rhys-Jones still in the stock room I was given a private viewing of Angus Malcolm's beautifully seductive photography.

At Stills Gallery, also in Paddington, William Yang staged a beautiful exhibition of old and new work and used the opportunity to present a new performance piece, an amalgam of several earlier works. I found William's black and white Australian landscapes, shown in the upstairs space, quietly enthralling and a wonderful foil to the somewhat noisier, though delightful, images in the main exhibition.

William is always engaging and entertaining, although this time he did seem a little nervous and the presentation was not quite as smooth as others have been. Several weeks earlier, during Chinese New Year, I was lucky to be invited to attend Meeting at Moree, a joint performance at Belvoir Downstairs between William Yang and Noeline Briggs-Smith that was part of COOLie. The two stories blended well, demonstrating different but parallel histories of vilification. 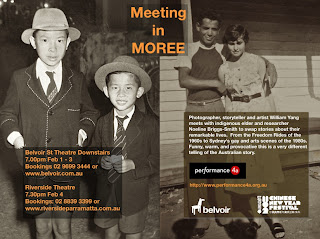 Posted by Jeffrey Hamilton at 3:35 PM No comments:

Progress on the Samoan Window 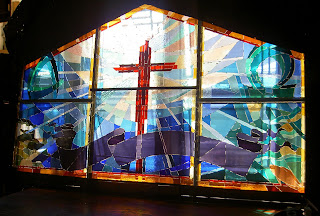 These are the centre three sections assembled in position.

Last night I attended the opening of a solo exhibition at Lo Fi gallery by Californian artist ABOVE, his first time in Sydney and in fact his first gallery exhibition. I was already familiar with this street artist's work and got quite excited when I spotted some of his arrows about in Hibernian House. ABOVE works all over the world; it was wonderful to see his work in person. 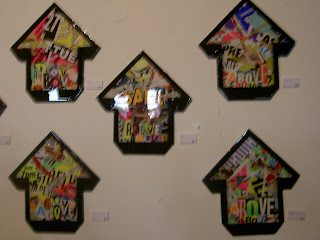 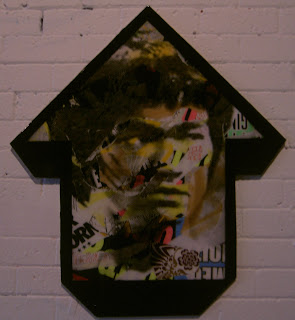 The exhibition was prompoted by the recent death of the artist's brother and so was titled appropriately "Here today; Gone tomorrow". All the personalities featured in the larger collages are artists who had been cut down in the prime of their careers.
Posted by Jeffrey Hamilton at 9:06 PM No comments:

The Congregational Church of Samoa in Sydney 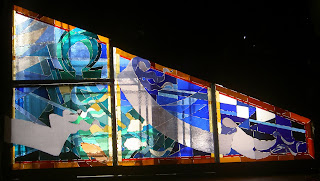 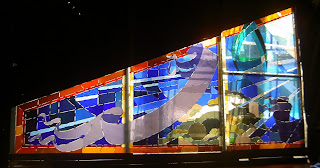 While the Arab World disposes of its dictators and despots and Christchurch crumbles, a new work is being built in the studio of Hamilton Design Glass. The pictures above show the left hand 3x panels and the right hand 3x. There is also a central panel, 7x in all, making up a gable window symbolically illustrating The Resurrection. This will be the first stained glass window for the Church which is located at Lugarno.

My heart goes out to those affected by the Christchurch earthquake. So sad to see the Cathedral so badly damaged, but as the Minister said last night, it's only a building..
Posted by Jeffrey Hamilton at 4:43 PM No comments: 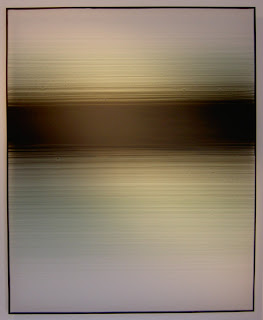 Geometry is a stunning exhibition at Sabbia Gallery which opened during the Ausglass Conference and has just one week left to run: try to get there! Sabbia invited 25x top notch studio glass artists from Australia and New Zealand to create a piece around the idea of Geometry and the resulting exhibition contains some extraordinarily beautiful works.

The headline piece shown above is the largest work I've ever seen of Cobi Cockburn's, one which takes her oeuvre to another plane altogether. Also demonstrating a 'great leap forward' (to my mind) are the pieces by Brenden Scott French. His work upstairs in the glass cabinet is gorgeous but difficult to photograph in-situ; but I have to say I'm particularly drawn to this rather impressionistic landscape which is hiding behind the gallery's administration desk.

Galia Amsel is a New Zealand glass artist whose name is not at all familiar to me though I have seen and admired her work at the Glass Artists Gallery in Glebe. I find this new piece produced for Geometry especially beautiful and beguiling. It is titled Spirit and in the words of the artist conveys a quietly conquering spirit rising above a dark and complex space. 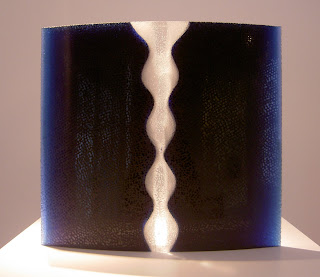 Posted by Jeffrey Hamilton at 12:10 AM No comments: 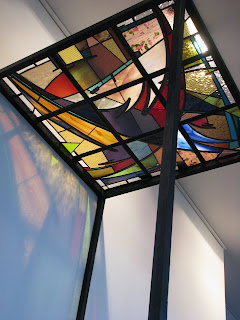 The Ausglass Conference hit town last week and while I couldn't attend the conference itself I participated in four of the associated exhibitions. This shot illustrates my stained glass skylight that I made for the Old Parliament House exhibition mid-2010 shown here in the Members show. 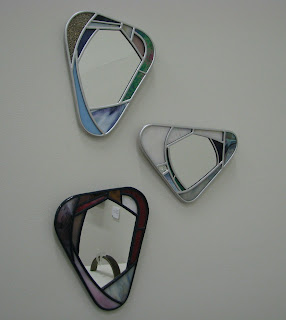 There was also a section within the Members' show for "Jewellery" and for "Production Work" and for this exhibition I made a new series of small abstract wall mirrors where I painted the lead calme. The Ausglass Members' Exhibition is always inspiring and the 2011 show was no exception. I especially enjoyed the Post Glass DVDs- a collection of short films where glass is featured in some way, sometimes in a very obscure way. The brain-child of Andrew Lavery, this was a mini- Tropfest and a real treat.

Gaffa Gallery's Refraction ["mapping a change in the direction of contemporary glass"] was another exhibition in which I showed work: Circus Chaos

And finally for Object Gallery's Collectors' Cabinet I made three new scuptural works using pieces of blown glass from my private collection. The work show here is Mount Vessel with Flowers. I've ground and polished all the edges of the 3mm glass inserts and set them into a sand and silicone mix inside a vessel by Nick Mount. 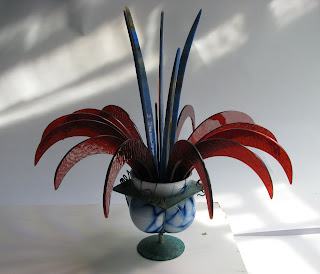 Have been spending as much time as I can on the Samoan Congregational Church window.. almost cut 4x of the seven panels. But I can't show you photos as I've lost my camera- disaster!

My partner had a stroke recently (fully recovered now) and when I'm very stressed things like that happen.
Posted by Jeffrey Hamilton at 3:04 AM No comments:

This is the full size charcoal cartoon for a new commission underway: a gable window for the Congregational Church of Samoa in Sydney, based on a design I made for the North Transept of All Saints Anglican Church, Tumut in 1997. At 6.5 metres in length the drawing is too big to lay out flat in my workshop. It is shown here onsite at the Church in Lugarno.

The client is delighted with the design and so I will be drawing up the cutlines this week and beginning to cut glass immediately after Christmas. 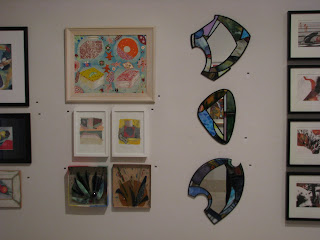 If you're looking for some unusual Christmas gifts, At The Vanishing Point in King St Sth, Newtown, is staging their Demolition Sale now. I have 3x mirrors and 2x glass Flower Boxes as a part of their show.

I also have 6x small works, including a new stained glass mirror, on display at TAP Gallery in Darlinghurst as part of their Christmas Miniatures Show. Opening night (and the Christmas Party) is this Saturday, 18th Dec.
Posted by Jeffrey Hamilton at 2:28 AM No comments:

Jeffrey Hamilton
Surry Hills, NSW, Australia
I'm a professional stained glass artist, specialising in the restoration of painted and fired work. I also miantain an arts practice spanning a diverse range of media, including collage, found object and assemblage, acrylic, and am particularly fond of working on paper with pastels, charcoal, graphite and ink. It's been a long time since I've painted in oils, but that's a plan, to get back into that.